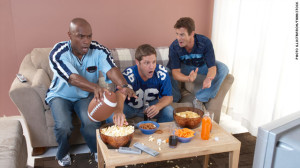 There is no denying that sports are widely celebrated across the globe, and for good reason. They are exciting and active and promote a healthy and fair expression of competition. Sporting competitions are universally the largest crowd draws in the world. The positive side of this is that sports keep people busy and happy. The negative side is, just like with anything that humans enjoy, we turn it into an obsession and overindulge in it. Sports is one of the world’s most common addictions. However, unlike with alcohol or gambling, sports addiction is culturally acceptable and socially embraced. However, it is undeniable that we are universally obsessed with it. Just look at society’s treatment of sports and sports figures:

This article was posted in Uncategorized. Bookmark the permalink. Follow comments with the RSS feed for this post. Both comments and trackbacks are closed.